Not sure whether you have a cold or the flu? Distinguishing which illness you are experiencing can be very tricky with the naked eye alone. They share many similarities – the most significant being that they both target the same area of the body. Many people don’t know the differences between a cold and the flu, but learning about the difference between each can make a huge impact on knowing what treatment is best and getting better quickly. The specialists at any Southern California UrgentMED walk-in clinic can help.

Differences Between a Cold and the Flu

Both the “common cold” and the flu are infections of the upper respiratory tract and primarily affect the nose, ears, and throat. Additionally, both are considered to be among the most common illnesses that humans experience. This is where the similarities end.

Despite affecting the same parts of the body, these two illnesses are caused by different types of viruses, show varying degrees of symptoms, and distinct recovery behavior. Learn more about these common diseases and how to determine whether you have a cold or flu.

Although both the cold and the flu are respiratory illnesses that share several symptoms, the severity of these ailments is often enough to distinguish which infection one has. The flu has a much more aggressive impact on the body than a cold and is more likely to lead to health complications such as pneumonia, and other health complications which can be fatal if left untreated. 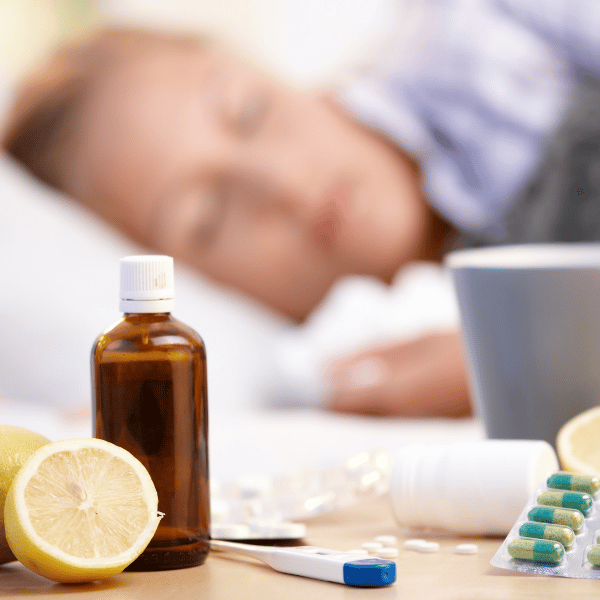 Bodily aches are quite common with influenza but rarely a reason for concern. These aches occur during any sort of infection where white blood cells are sent to combat the bodily invaders, which inherently leaves muscles stiff and prone to pains. Although aches can occur during a cold, they are far less severe than with the flu and are unlikely to make daily activities more difficult, as is common with influenza.

Fever is a common symptom of both bacterial and viral infections and indicates that the body is fighting the disease. Essentially, the body is, via the hypothalamus, attempting to rid itself of the illness by increasing its body temperature. A fever may be accompanied by sweating, loss of appetite, weakness, dehydration, and chills.

Fevers are common occurrences with the flu but very rarely occur during bouts of a cold.

Colds that develop fevers often indicate that the cold has developed a complication or is another illness entirely. High temperatures of 104 degrees or higher are extremely dangerous, and a doctor near you should be sought out immediately.

Sneezing, congestion and an inflamed larynx are iconic symptoms of a cold. These symptoms may occasionally occur during a case of the flu, but will not result in a runny nose as colds often do, and are never the sole symptoms of the flu.

How Soon Do Symptoms Show?

One of the most notable differences between the cold and flu is the onset of symptoms. Cold symptoms can develop in as little as ten hours after contracting the virus, but those ailments appear gradually, while more manifestations of the illness may later follow. Meanwhile, flu symptoms are full-blown and strike very suddenly. The influenza virus can take hold of the body in one or two days, causing a quick onslaught of severe symptoms such as fever, bodily aches, and fatigue. In some cases, individuals have attested to noticing exactly when they begin to feel like they have flu-like symptoms.

Both the cold and the flu have peak seasons during the winter. Unlike the flu, there is no vaccine for the common cold (The average adult is expected to contract two to three of these viral infections per year), and both viruses have no cure. Both diseases can be transmitted through the air and are highly contagious during the beginning stages of the disease.

According to the Centers for Disease Control and Prevention, healthy habits like covering your cough and washing your hands often can help stop the spread of germs and prevent illnesses like colds and the flu.

Suffering From Symptoms and Need to Know if It’s the Cold or Flu? Come to UrgentMED Today

Take advantage of flu vaccinations. Protect yourself and your family during peak season and decrease your chances of getting infected. The 19 clinics that are part of UrgentMED offer local flu vaccinations in the Southern California area with no appointment necessary. UrgentMED accepts a wide network of different insurance policies and guarantees affordable rates for individuals or families that are currently uninsured and need medical attention. If you suspect that you already have a cold or flu, doctors are on hand to provide a diagnosis seven days a week. Find a walk-in clinic near you and start feeling better today!